What is the Resolution of Blu-ray Disc? Here is the Answer

After knowing the above information, let's focus on 1080P Blu-ray and 4K UHD Blu-ray. That's the only two types of Blu-ray disc resolution.

Which Blu-ray Resolution Should I Get?

Blu-ray disc is capable of storing hours of video in Full High-Definition (1080P) and Ultra High-Definition (2160P, also known as 4K UHD). For now, most Blu-ray disc is 1080P. If I want to create a Blu-ray compatible environment, which Blu-ray resolution should I get, 1080P Blu-ray or 4K UHD Blu-ray?
Of course, the resolution is the most obvious difference between 1080P Blu-ray and 4K Blu-ray. But more than that, 4K Blu-ray:

• The exponential increase in luminosity range with HDR (High-Dynamic-Range) support.

• Encode in H.265, which is an advanced codec for better compression.

• Capacity up to 100GB, it can better storage longer videos at higher quality.

What Do I Need to Watch 4K Resolution Blu-ray Disc on TV?

3.4K Blu-ray TV with HDMI 2.0 adapter. (You'd better get a 4K HDR TV because HDR requires TVs that can display more colors and have a higher peak brightness.)

Even if you already have a Blu-ray TV and Blu-ray player, playing Blu-ray on a computer provides another choice to enjoy Blu-ray movie. Compared to watching Blu-ray movies on TV, building a Blu-ray compatible computer is more convenient and cheaper. You will need:
1.Blu-ray disc. 2.Software Blu-ray player such as VideoByte Blu-ray Player. 3.External Blu-ray drive. 4.Win/Mac computer.
Once you have tried VideoByte Blu-ray Player, I sincerely hope that you will fall in love with it. VideoByte Blu-ray Player is specially designed for helping people enjoy Blu-ray movies on both Windows and Mac. It allows you to play 1080P Blu-ray disc/Blu-ray/Blu-ray ISO files without Blu-ray region limitation. And this program offers full playback control, which allows you to choose the subtitles tracks, audio tracks, titles, chapters, etc. at will. Now you can download the trial version below.
Free Download
Free Download

Connect an external Blu-ray drive with your computer and then insert the Blu-ray disc into it. Now launch VideoByte Blu-ray player. On the main interface, choose the "Open Disc" button to load Blu-ray disc to VideoByte.

After loading, you will see a menu on the interface, where allows you to select your favorite audio tracks, subtitles, etc. You can click on "Other Titles" to watch all the content in the Blu-ray disc such as the movie trailer and storyboard. 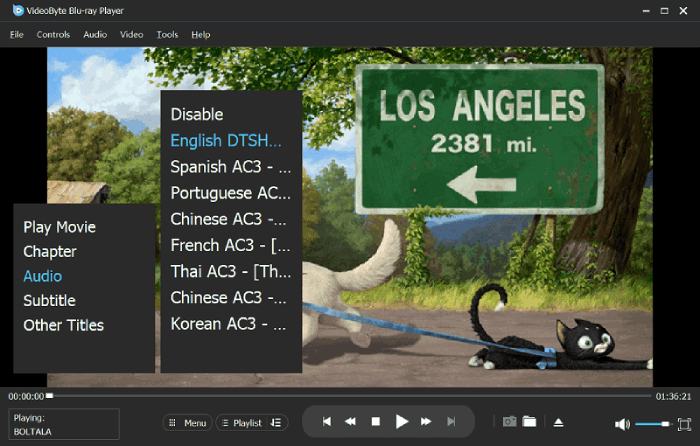 When you finish all the settings, click on the "Play Movie" button to start watching the Blu-ray movies with original video/audio quality.
Below is the video tutorial to help you watch Blu-ray movies easier.
Hope this article is clear enough to explain what is Blu-ray disc resolution and how to play Blu-ray disc on TV/laptop. If you have more questions about the resolution of Blu-ray discs, you can leave it below or contact via email. Thanks for reading!